Like many of you we stumbled upon this mess: 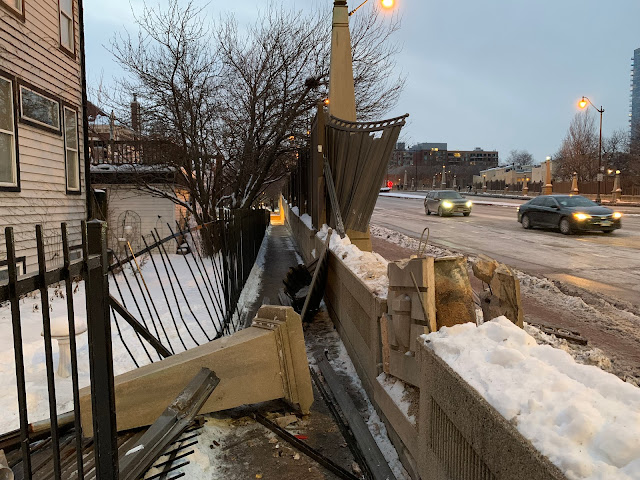 According to CBS - looks like a car crashed into a city plow and this is part of the destruction:

A car crashed into a city plow truck in the Loop early Saturday morning, according to police.

Around 12:45 a.m., the driver in the vehicle while traveling westbound on the 1100 block of South State Street and failed to obey a traffic signal, striking a city plow truck traveling southbound on State Street, causing the plow to jump a curb and hit a large fence.

Interesting....(via ABC7):
Has anyone tried this yet? Doesn't sound that great to us...but we're curious to try it.
Sloopy No comments:
Share

X-Pot Gets Some Love from Fox 32

Not exactly the hardest hitting story here, but Fox32 did a super small segment on X-Pot:

The Shedd Aquarium is awesome and it looks like it's going to be getting even better (via Chicago Tribune):

The Shedd Aquarium houses a remarkable creature called an archerfish that spits water 3 feet into the air to knock insects off trees into the water for dinner.

Right now, the archerfish swims in an aquarium with a label displaying its name. That’s it.

But soon, visitors will be able to see the fish actually do its thing — spitting at a tree to dislodge crickets for a meal.

Interactive experiences like this inspire the public to care more about the fish and its habitat, according to Bridget Coughlin, president and CEO of the Shedd Aquarium.

This connection between humans experiencing wild animals and being inspired to conserve is the driving force behind the aquarium’s new $500 million project, an eight-year vision called the Centennial Commitment.

Connecting people to nature will involve creating new aquarium galleries along with immersive experiences and programs.

For example, the north gallery, which houses rivers, islands and lakes exhibits, will be renovated into a Caribbean coral reef habitat within a 40-foot glass tunnel. Visitors will feel as if they are part of the reef with sharks, rays and colorful fish.

Renovation and re-imagination of the aquarium galleries and educational facilities will cost roughly half of the $500 million and take four years to complete. Renovations are expected to be finished in 2026, ahead of the organization’s 100th anniversary in 2030.

Here is a rendering of one of the projects - "a Caribbean coral reef habitat that will give guests different perspectives of sharks and rays within the diverse ecosystem":

Apolonia (2201 S. Michigan) - probably the most exciting restaurant to open in the Sloop in the last couple of years - got some viral love for one of their bread dishes (via NBC5):

Gillanders said the restaurant's pastry chef was trying to make a focaccia to capitalize on the trend, but they wanted to make it different.

"The deep fry became this thing. We threw a dough ball into it, it just ballooned up," he said.

The restaurant likened the dish to a "savory black truffle doughnut" and said it has since taken off in a way they never expected.

"A lot of people started to cut them open and fill them like a pita and you'd be shocked what people put into those things," he said.

NBC5 has a good overarching video about what they're doing at the restaurant.  It's early in the morning and I'm hungry for dinner:

One South Loop spot gets hit with citation on new indoor mask mandates (via Fox32):

The city of Chicago has cited six businesses for failing to enforce the city's COVID-19 indoor mask mandate.

Investigators from the Department of Business Affairs and Consumer Protection (BACP) conducted 56 investigations over the weekend to see if people were wearing masks and whether there were signs posted about the requirement.

From Thursday through Sunday, the following businesses were each issued two citations for violating both requirements of the mandate, which went into effect on Aug. 20:

Are Half Sour and Burger Point Best Burger Spots in the Sloop?

We're not burger experts, but apparently this instagram user does.  They have Acadia as the highest ranked burger spot in the Sloop (obviously they're not aware they've closed).  Beyond that, Half Sour (755 S. Clark) and Burger Point (1900 S. State) are the only other South Loop locations ranked:

Happy and Healthy 2022 from Sloopin!